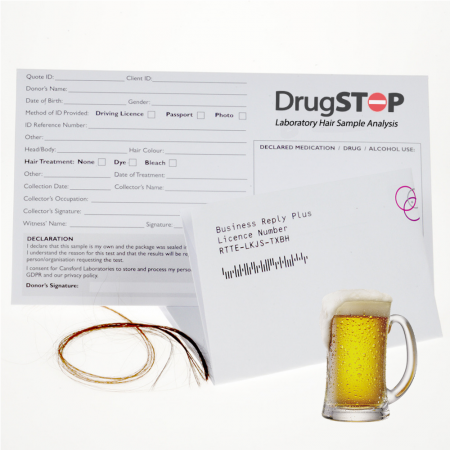 This testing kit provides everything you need to test a sample of hair for longer term historic alcohol use, with a detection window of up to 2 years.

This hair testing kit provides all you need to test a sample of hair for longer term historic alcohol use.

We work with one of the UK’s leading testing laboratories to provide hair sample analysis with a fast turnaround (results usually returned within 3 days).

Hair testing is considered one of the most accurate laboratory tests for drugs and alcohol as it is almost impossible to cheat. A hair sample of around 5-millimetre thickness is taken from the head or body of the donor and sent to the laboratory in the self addressed, tamper-proof envelope supplied with this kit.

Fatty Acid Ethyl Esters (FAEE) hair testing is designed to show a long-term (10 months to 2 years) alcohol use. It is important to note that from the time an individual stops the consumption of alcohol, the levels of FAEE can rise, before dropping 6-9 months after abstinence has commenced.

A basic level of FAEE is measured in everyone’s hair, even of those who are teetotal. Testing for both FAEE and EtG complement one an other with respect to their different sensitivity to hair cosmetics – for example, false positive FAEE results due to use of hair cosmetics containing ethanol would not be confirmed because the same specimen would have a negative EtG result.

This website uses cookies to improve your experience while you navigate through the website. Out of these, the cookies that are categorized as necessary are stored on your browser as they are essential for the working of basic functionalities of the website. We also use third-party cookies that help us analyze and understand how you use this website. These cookies will be stored in your browser only with your consent. You also have the option to opt-out of these cookies. But opting out of some of these cookies may affect your browsing experience.
Necessary Always Enabled

Any cookies that may not be particularly necessary for the website to function and is used specifically to collect user personal data via analytics, ads, other embedded contents are termed as non-necessary cookies. It is mandatory to procure user consent prior to running these cookies on your website.